Over 300 people registered for the first-ever Blues around the World 5K virtual race with runners joining in from all corners of the world - from North America to Australia. This heat map captured the locations.
Jelena Damjanovic

More than 300 members of the University of Toronto Varsity Blues community recently took part in the first Blues Around the World virtual five-kilometre race.

The fundraiser, which drew participants from around the globe, was open to everyone and aimed to connect people and get them moving. 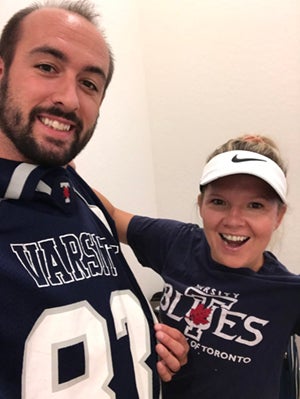 Masha and Cory Kennedy – both graduates of the Faculty of Kinesiology & Physical Education and former Varsity Blues athletes – joined the race from Arizona.

“It's too hot to train outside in Arizona at this time of the year, but we did it anyways in 100-plus degree heat,” says Masha. “We’re both proud Varsity Blues alumni and try to stay in touch and support their initiatives whenever we can. The race was a fun way to feel connected to other Blues across the globe.”

Masha was co-captain of the tennis team from 2004 to 2008 and won four Ontario University Athletics (OUA) championships. Cory was a star Varsity Blues football receiver from 2004 to 2009. In 2020, the pair moved to Arizona after Cory took a job as head of strength and conditioning and performance science for the Chicago Cubs’ minor league program. 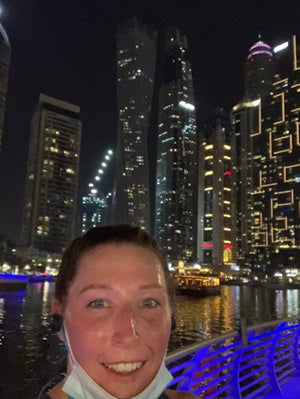 Brittney Scott, meanwhile, raced from Dubai, where she is currently working as a zone operations manager for Expo 2020 Dubai.

“It's been challenging living so far away from family and friends, particularly during this pandemic,” she says. “This was a great opportunity to get a little taste of home and feel connected with my Varsity Blues family.”

Scott swam for the Varsity Blues from 2004 to 2009 while completing her physical and health education degree. While it can be tough to race in the heat and humidity of Dubai, she says she was motivated by the global nature of the event.

“Often living abroad means that you aren't able to participate in anything back home, so it was great to have the opportunity to be involved and follow along on social media with other Varsity Blues athletes around the world,” she says. “I was so grateful to be able to be a part of this and I'm looking forward to the next race ... maybe a virtual swim?”

Varsity Centre and Back Campus Fields HAVE RE-OPENED for select outdoor activities.
Athletic Centre and Goldring Centre WILL RE-OPEN on July 26, 2021.
END_OF_DOCUMENT_TOKEN_TO_BE_REPLACED