Sports information officer, Jill Clark, was recognized with a KPE Staff Excellence Award for being a consummate Blue and going above and beyond the call of duty to ensure that U of T is a leader in sports information and athletic communication at the provincial and national level (all photos by Seyran Mammadov)

Once a year, the Faculty of Kinesiology and Physical Education takes a breather to take stock of their accomplishments over the year and congratulate each other on their successes in advancing the Faculty’s mission. That mission – to develop, advance and disseminate knowledge about physical activity, health and their interactions through education, research, leadership and the provision of opportunities – is one they’ve all got memorized, jokes Ira Jacobs, professor and dean at KPE. More importantly, they do it so well, the Faculty decided four years ago to establish a day of celebration of KPE staff and faculty achievements, calling it Recognizing U. On this day, staff and faculty gather for lunch, an award ceremony and games, taking a break from work to exchange some well-deserved pats on the shoulder.

Expertly MC-ed by David Ridge, KPE’s broadcast and audio visual coordinator, the event recognized the following faculty and staff for going the extra mile in 2019. 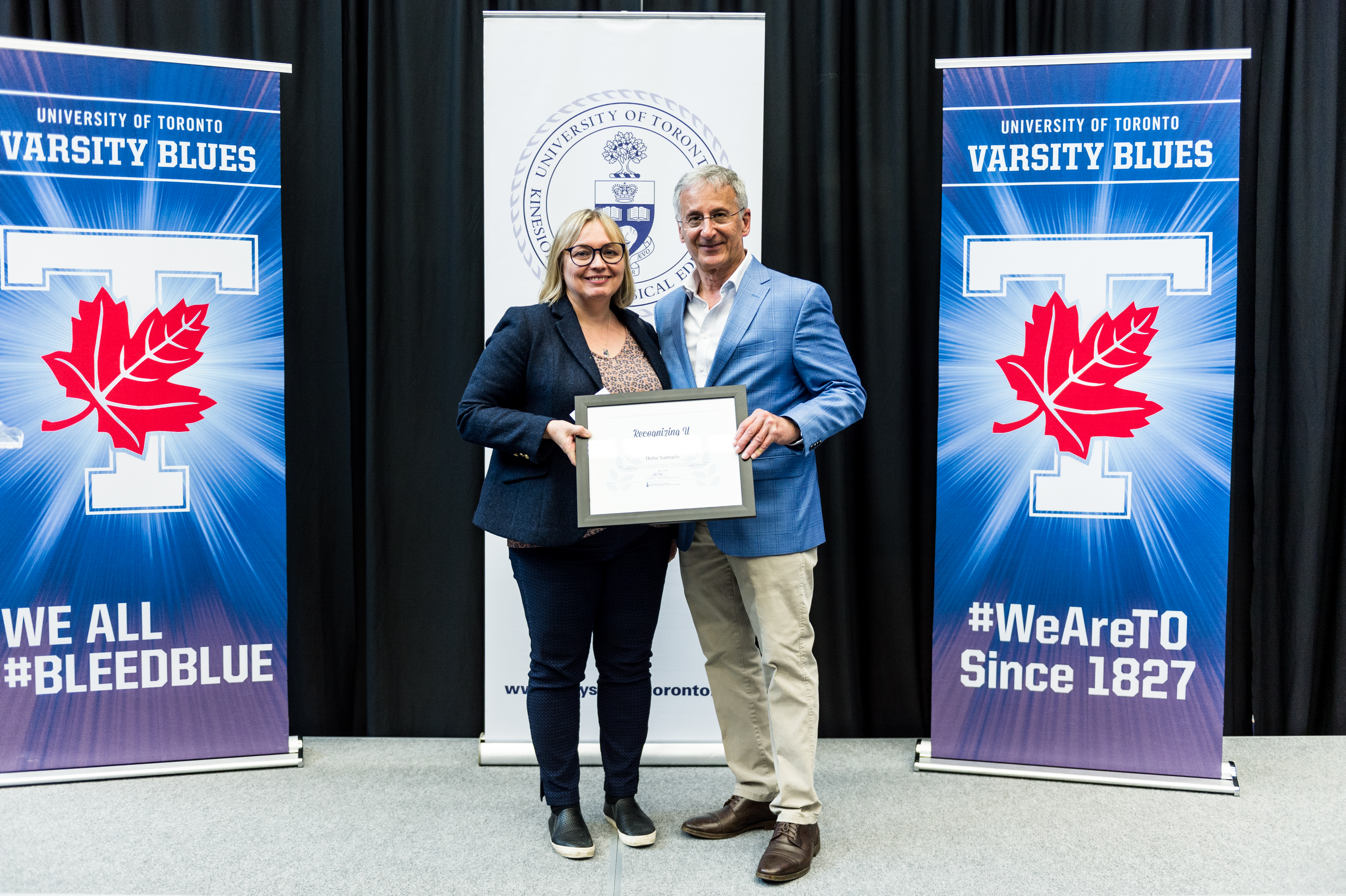 •    Assistant Professor Boba Samuels was awarded the KPE Award for Excellence in Teaching for demonstrating excellence in providing writing support for undergraduate and graduate students. As Director of the Health Sciences Writing Centre, Samuels not only supports KPE students, but also U of T students in other Health Sciences divisions.

•    Assistant Professor Kelly Arbour-Nicitopoulos was awarded the KPE Research Excellence Award for using her expertise to help enhance physical activity experiences in children and youth with disabilities across the country. Arbour-Nicitopoulos is the research lead for the SMILE program, an experiential learning opportunity for KPE Masters of Professional Kinesiology students that focuses on children and youth with disabilities. 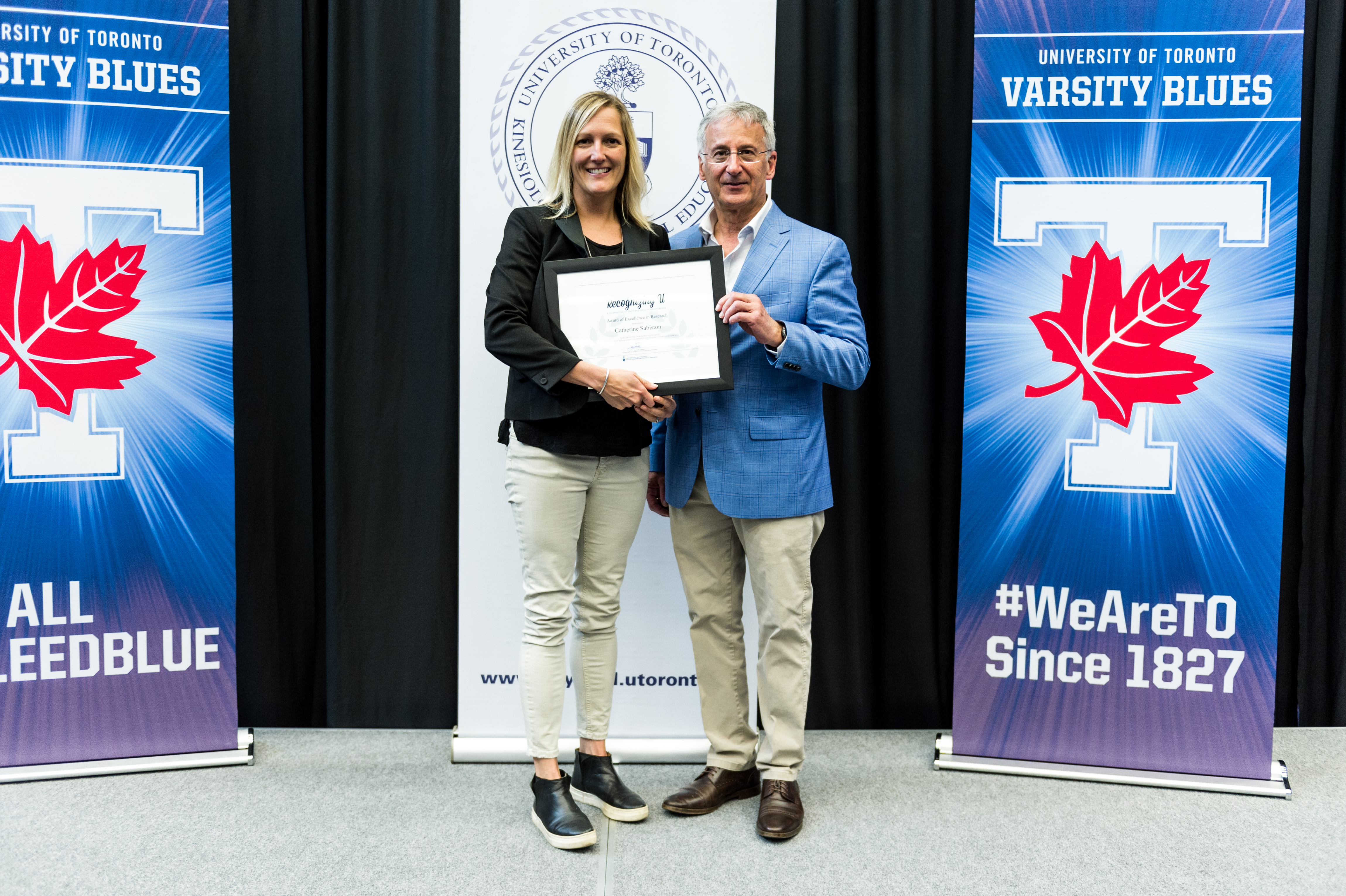 •    Professor Catherine Sabiston was the other recipient of the KPE Research Excellence Award, not only for the number of publications or grants under her name, but for the recognition she receives through the success of her trainees, two of whom have taken on research positions with industry partners, while two others have accepted tenure-track academic positions at some of the best universities in Canada.

•    The KPE Award for Excellence in Research Integration went to Professor Scott Thomas, who was recognized this year by the Canadian Society for Exercise Physiology for over 30 years of translating exercise physiology knowledge into practice and standards for exercise and fitness testing. These standards have been adopted across the nation and internationally.

•    Tony Amaral was recognized with the KPE Staff Award of Excellence for being the unofficial face of the Athletic Centre since the day the doors first opened in 1980. For years, Amaral was the first person to arrive in the morning and make sure that everything is in order for members, staff and students. Amaral retires in June and will be missed for his friendliness and helpful manner, as well as his musings on everything from world economy to Portugal and soccer.

•    Sports information coordinator Jill Clark received the other KPE Staff Excellence Award for being a consummate Blue and going above and beyond the call of duty to ensure that U of T is a leader in sports information and athletic communication at the provincial and national level. From scoreboard graphics to webcasting production, video, stats, media hosting and post-event compliance, Clark has done it all and is a true team player. 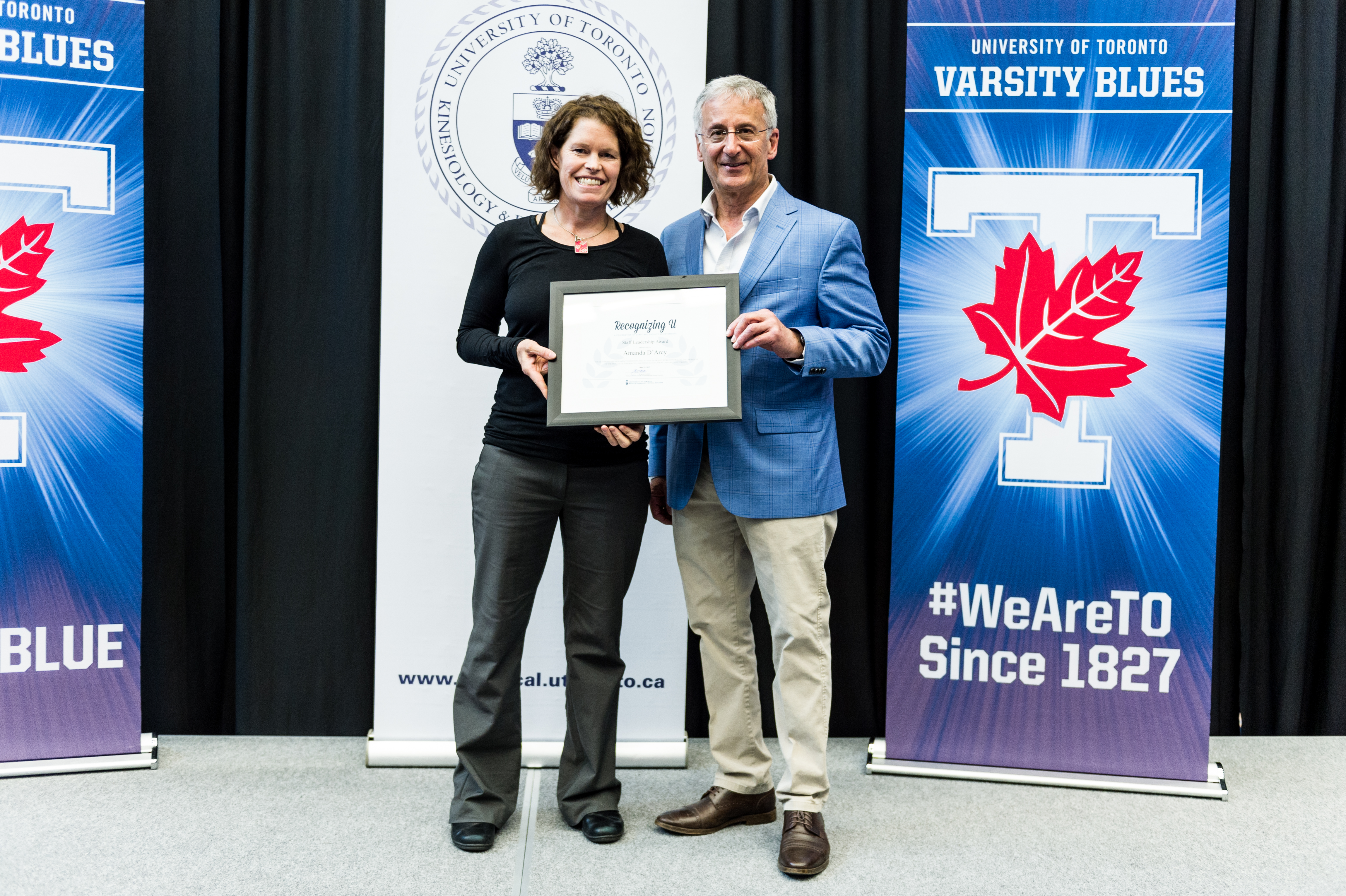 •    Public relations officer Jelena Damjanovic was awarded the other KPE Staff Leadership Award for writing and securing coverage of the Faculty’s news, research and innovations and raising its profile locally, nationally and internationally. 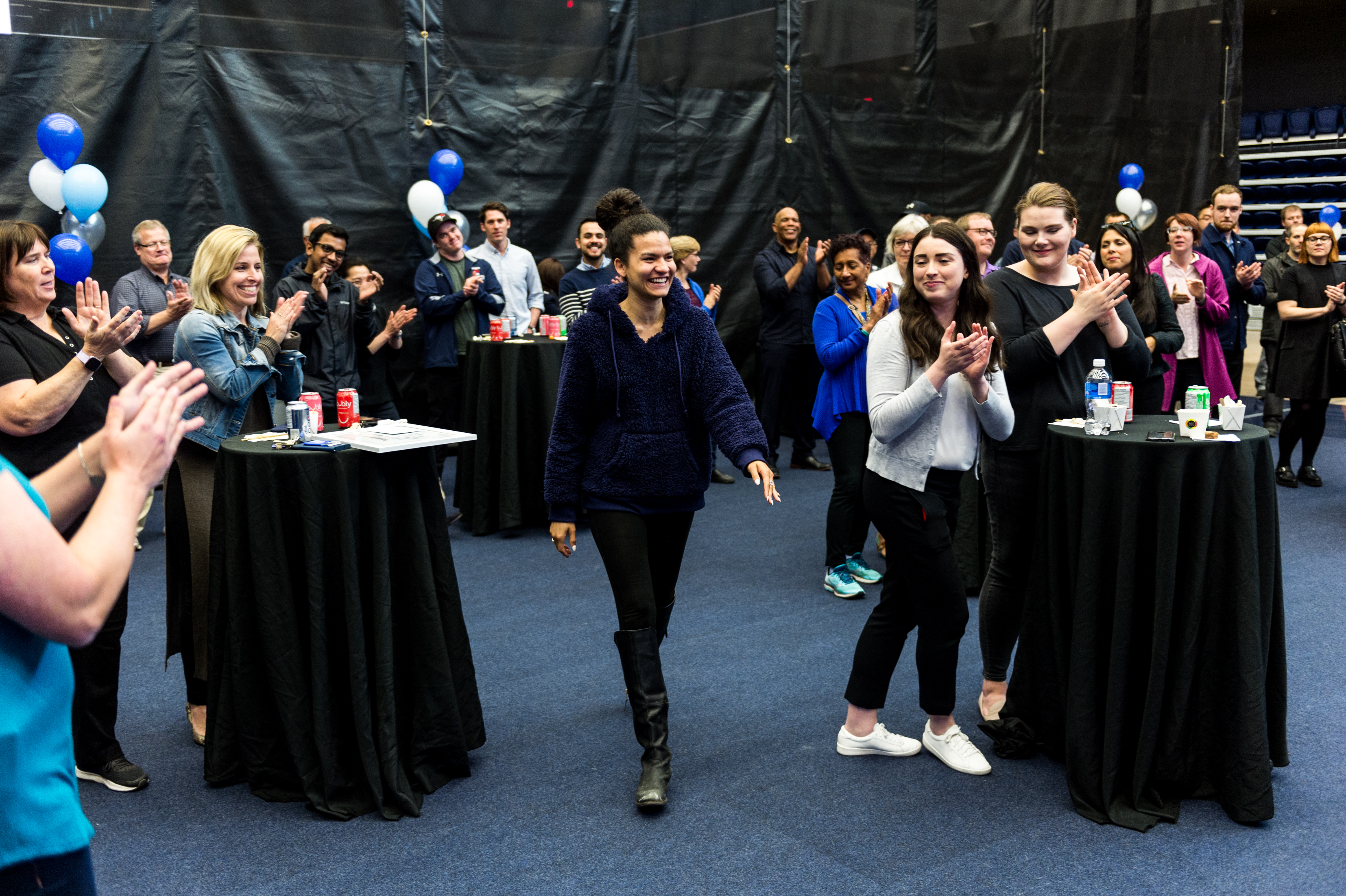 •    Four staff members were awarded the Outstanding Casual Employee Awards: Brittney Osland for her outstanding work in the merchandise, apparel and ticketing sales department, Megan McBride and Melissa Dorothy Stapleton for their superior work in the customer and membership area, Huixin Feng for her outstanding work in the administration of intercollegiate business & strength & conditioning areas and Seyran Mammadov, Varsity Blues photographer, for capturing some of the best photos of the Blues.

•    The Varsity Blues were lauded for bringing home ten OUA provincial banners, a feat made possible not only through their talent and skills, but also the extraordinary guidance and leadership of outstanding coaches, many of whom were honoured for their work this season provincially and nationally.

COACH OF THE YEAR RECIPIENTS (OUA, U SPORTS, ETC.)

•    Ainsley Scott, Amanda D’Arcy and Toria Vair were recognized with the U of T True Blue Award for their invaluable contribution to the university every day.

•    The Excellence through Innovation Award went to Sharon Grandison for her leadership on UTime, the time and attendance project.

•    Pursuit Magazine, produced by Sarah Baker and the public relations and communications team, won a 2018 Silver Leaf Award of Merit from the International Association of Business Communicators. 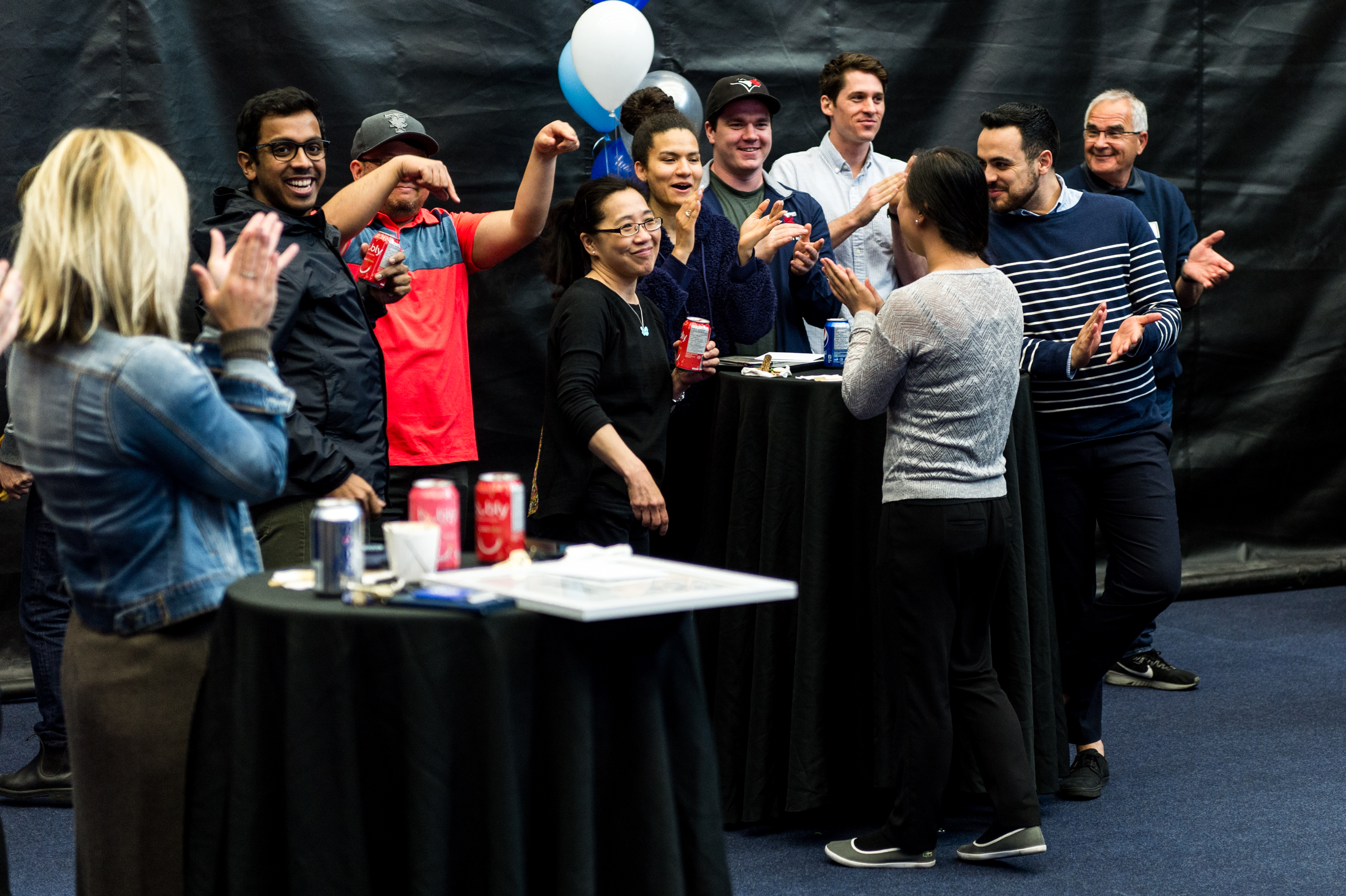 •    Last but not least, Giovanni Denardis and Tony Amaral, both athletic facility operators, were recognized for stepping into retirement. 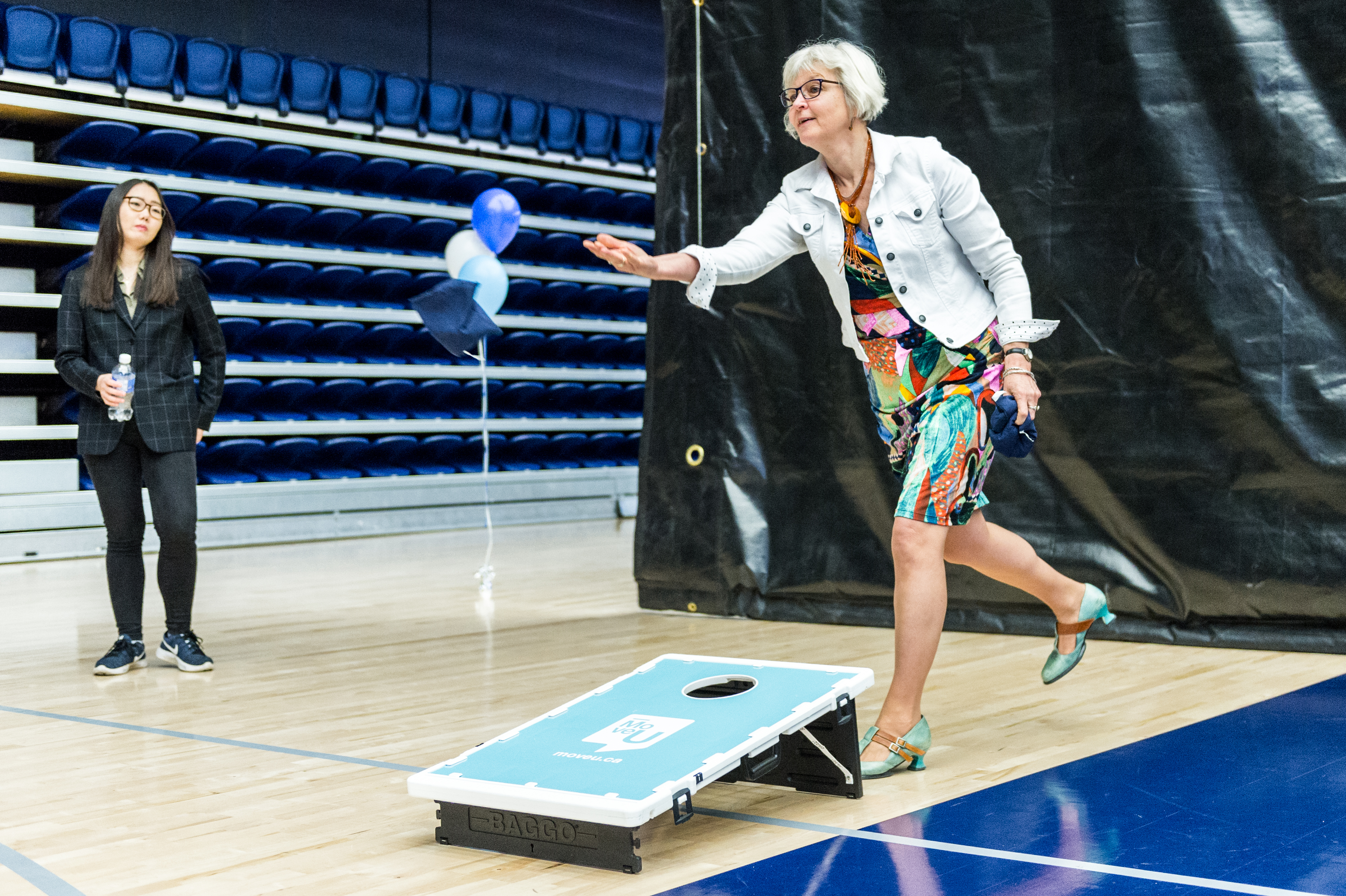 Rosanne Lopers-Sweetman, KPE’s chief administrative officer, closed off the award ceremony portion of the event recalling some of the challenges the Faculty faced in the past year, including the flooding of the Field House at the Goldring Centre for High Performance Sport. The flooding required not only extensive repair work, but also relocating and rescheduling games, practices, programs and events - a massive undertaking made possible by an adaptable staff capable of mobilizing quickly, she said.

Following the award ceremony, staff and faculty enjoyed physical activity games, before returning to their offices, labs and classrooms to do what they do best – work as a team on delivering the KPE mission of developing, advancing and disseminating knowledge about the interactions of physical activity and health through education, research, leadership and the provision of opportunities.